Re-imagine the city
with Tomás Saraceno

Suspended at the top of Torre Glòries is Cloud Cities Barcelona, an interactive artwork by artist Tomás Saraceno that transforms the observation deck into a suspended realm in which to gather and dialogue differently. Participants are invited to move along different paths through some of the 113 cloud spaces of communal encounter and critical speculation, occupying an area of 130 m³. The interactive sculpture invites us to look inwards and outwards, to re-think what an observatory in the 21st could be and to imagine the multiplicity of worlds made manifest in the changing shapes of passing clouds.

A web of 6 kilometres of tensioned cables connected by 5000 nodes challenges the verticality of the observatory’s distant gaze through alternative geometries of togetherness. Like droplets of water condensing along the strands of a three-dimensional spider’s web, the connections highlight the interdependence and interrelationship between all living beings that inhabit it, where the actions of one affect the whole community. Communal spaces nestled within the sculpture include a selection of books, available to read, share and engage in collective dialogues and reconsider the threads that bind networks of care.

Dare to experience Tomás Saraceno’s Cloud Cities Barcelona suspended at a height of over 130 metres in the dome of Torre Glòries. Experience an immersive artwork, an invitation to inhabit shared time while considering alternative constellations of the urban public sphere, speculative architectures and the environmental crisis, within an entangled web of life.

To access the sculpture, please refer the current regulations and conditions of use.

Cloud Cities Barcelona builds upon Saraceno’s long-standing artistic inquiry Cloud Cities, a common imaginary for an ethical re-alliance with the environment, the planet and the cosmic/web of life beyond anthropocentrism.

This ludic proposal invites us to move our bodies in a different way while inside a sculpture suspended over the city, opening the imagination to Barcelona’s shared futures as participants engage from diverse bearings, where there is neither up nor down, no inside or outside and all is floating.

The work of Tomás Saraceno, destined to become one of the most relevant sculptures in Barcelona, presents a multitude of layers, redefining what an observatory can be in the 21st century:

On a conceptual level, Saraceno proposes a sculpture based on Cloud Cities, one of his main objects of study as an artist. Cloud Cities Barcelona has different readings. On the one hand, recreational, as it allows visitors to move through a sculpture that floats suspended above the city. On the other hand, a reflection on utopian futures where fossil fuels are not needed for travel, as well as on the interdependence of all living beings, where the movement of one affects the entire community. 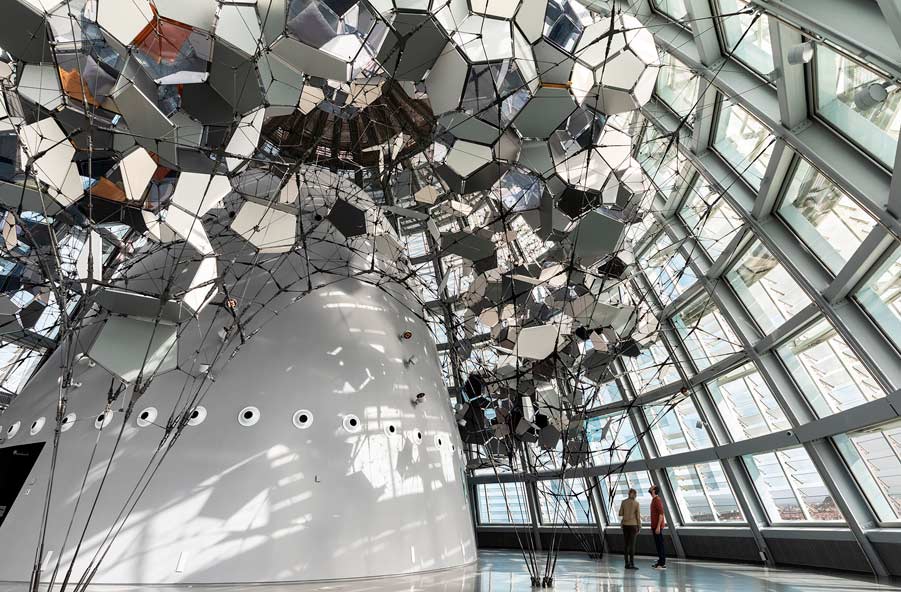 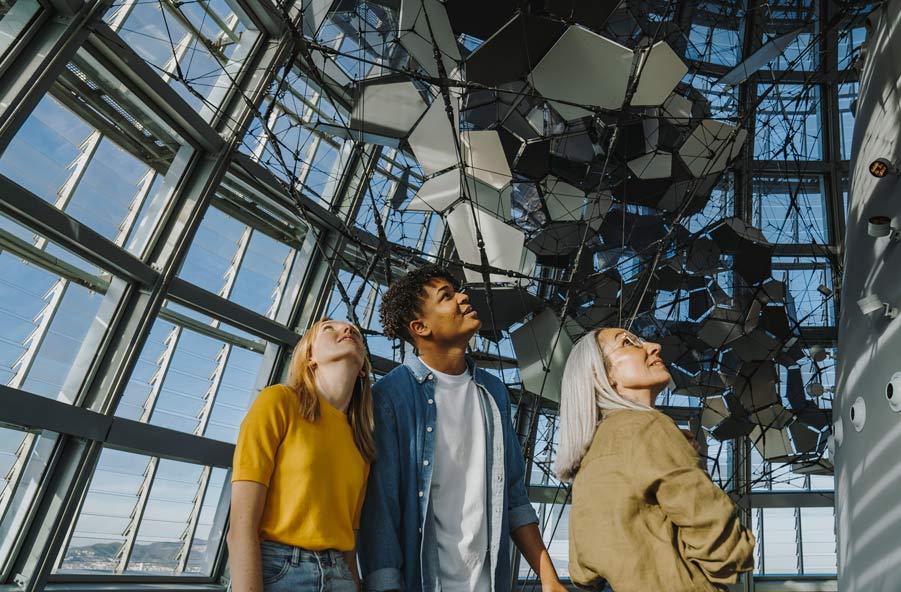 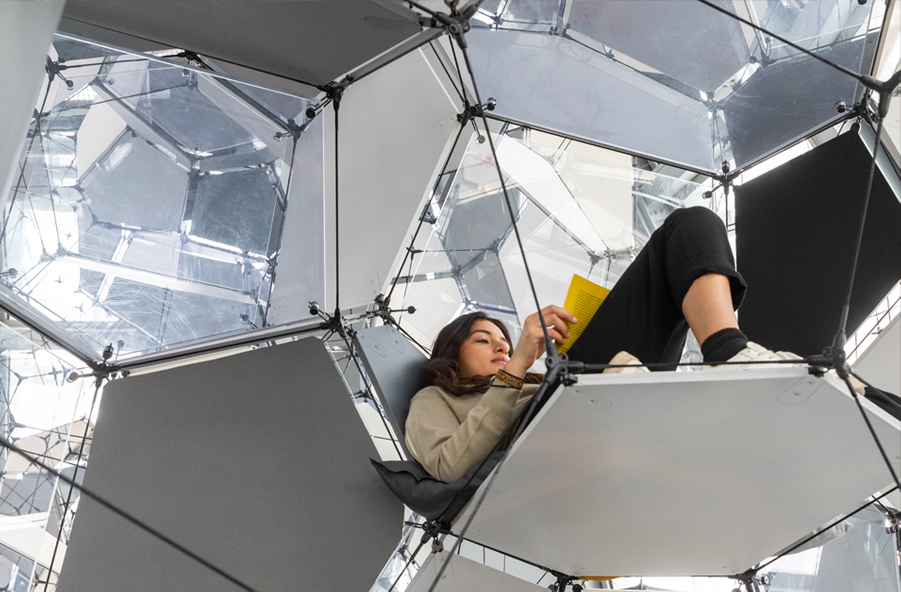 When clouds appear like rocks and towers, the Earth’s refreshed with frequent showers.
If spiders break off and remove their webs, the weather will soon be wet.
Stable climates might be granted if souls remain open to webbed encounters.

Tomás Saraceno’s immersive sculpture is his first permanent art installation in the country and his largest interactive sculpture in southern Europe. Suspended inside the tower’s dome and built using a structure of tensioned cables, Cloud Cities Barcelona can also be read in figures:

Tomás Saraceno is an Argentina-born, Berlin-based artist whose projects dialogue with forms of life and life-forming, rethinking dominant threads of knowledge in the patriarchal era of the Capitalocene and recognising how diverse modes of being engage a multiplicity of vibrations in the Web of Life.

For more than two decades, Saraceno has activated projects aimed at rethinking the co-creation of the atmosphere, including Museo Aero Solar (2007-) and the Aerocene Foundation (2015-), towards a society free from carbon emissions and the abuses of the Capitalocene. Aerocene has floated 7060 minutes in the air free from carbon in 110 tethered flights, 15 free flights and 8 human flights. The 2020 project Fly with Aerocene Pacha, stood in solidarity with the indigenous communities of Salinas Grandes (Jujuy) and their protest against harmful lithium extraction practices in northern Argentina. With Aerocene, Pacha set 32 world records, marking the most sustainable flight in human history.

Arachnophilia, an interdisciplinary, research-driven community, also emerged from the artist’s more than 10 years of collaboration with humans, spiders and their webs. With researchers at the TU Darmstadt, Saraceno developed the Spider/Web Scan, a novel, laser-supported tomographic technique that allowed precise 3D models of complex spider/webs to be made for the first time. Nggàm dù, a web portal by the spider diviners of Somié (Cameroon), meditates on the possibilities of reciprocal, intercultural and inter- and intraspecies relations.

Saraceno’s work with local communities, scientific researchers and institutions around the world, aims to seek out a more equal balance of human, techno- and bio- diversity, with the understanding that knowledge is produced from specific situations. Within the variety and scale of his art practice, he has held numerous residencies including MIT Center for Art, Science & Technology (2012-) and Atelier Calder (2010); published in Nature and PNAS; presented a TED talk; staged artistic interventions with COP20, COP21 and COP26; has lectured at Princeton, Columbia, Centre Pompidou, Herald Design Forum, Hirshhorn Museum, CCK and Interspecies Internet, among other locations.

Saraceno lives and works in and beyond planet Earth. 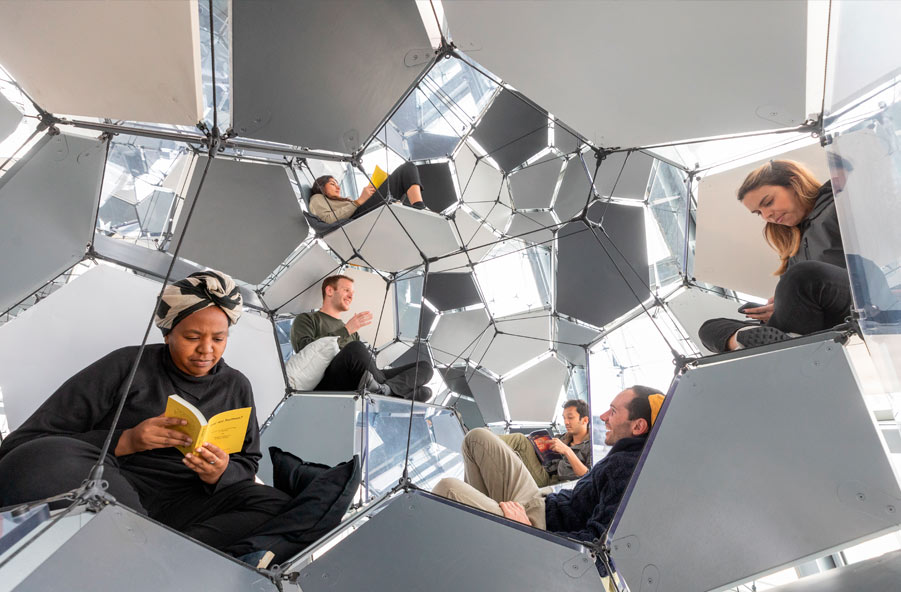 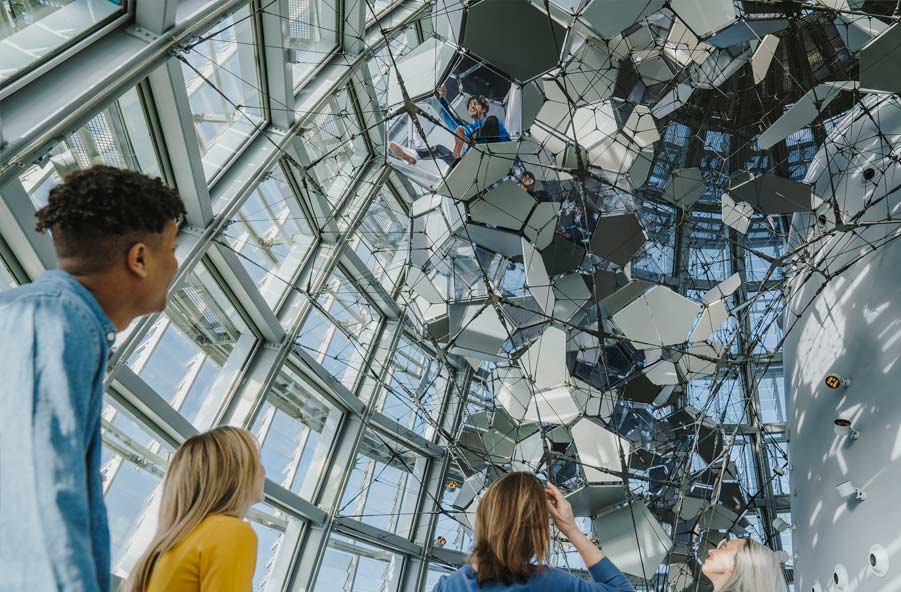 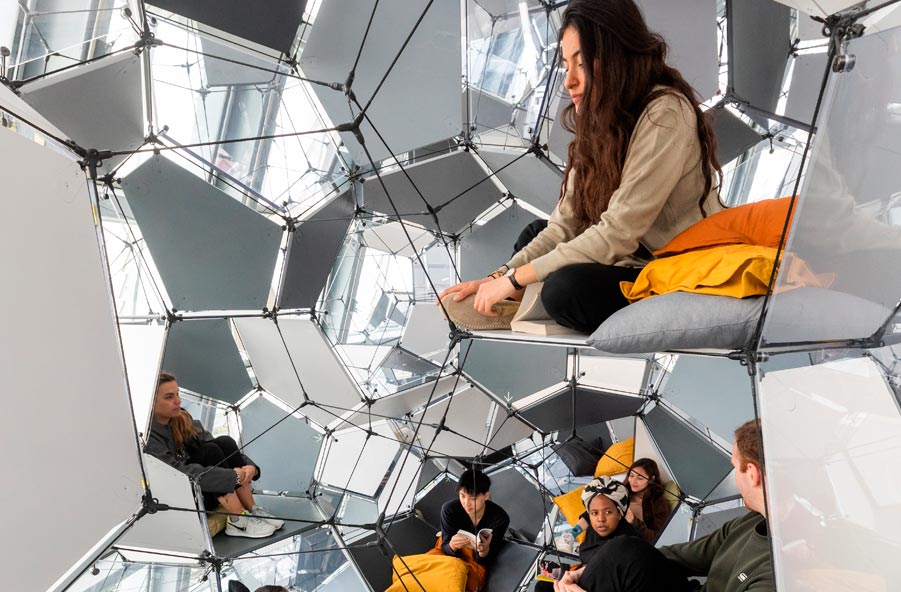 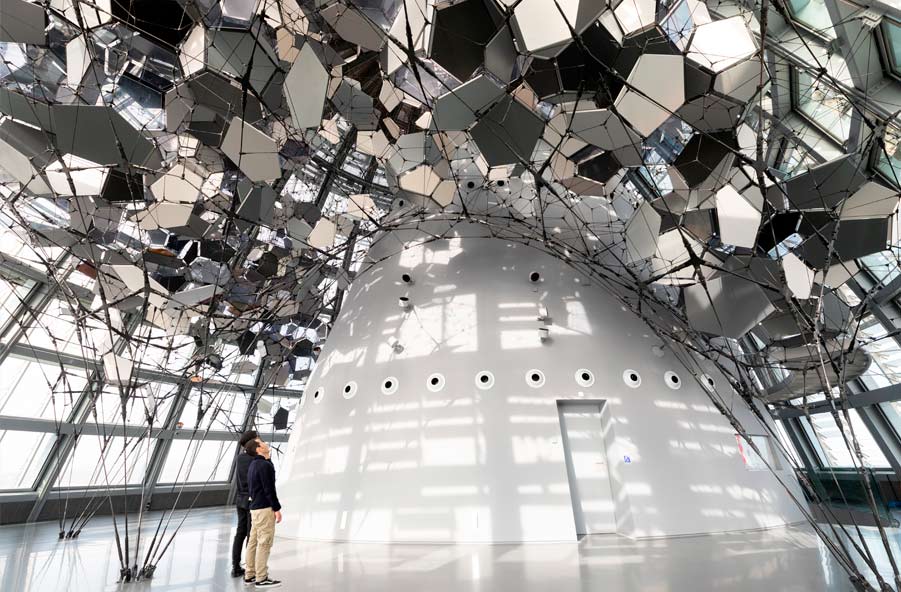